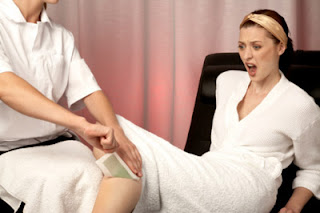 (I'm going out a bit on a ledge to discuss this current topic, but I'm going to trust my audience.)

There are many kinds of spas in the Boston area, and I've been to a variety. There are some that do hair and facials, some that offer massages and waxing services, some that just do manicures and pedicures. And there are super-upscale spas and those that specialize.

For those times that I've saved up and wanted the ultimate luxury treatment, I splurge on Exhale. It's expensive, but you get a lot. I love the changing room, with its steam room, sunflower showerheads, and how they provide all the necessities so you don't have to bring your own brush, hairspray, or mouthwash. The surroundings are gorgeous and relaxing, and the staff is fantastic. Recently, I had a massage and facial there, which I booked through their online system. This required using a credit card to pay in advance and I put in a new card, since the old one they had in the system for me had expired. I actually paid with a gift certificate, and they promised to refund my card, and called me on Monday to tell me that they did.

Two weeks later, I still couldn't see the refund and I called back. It turned out that the system had refunded my expired card, since it was the first one in the system. They apologized profusely, told me that they would fix the problem immediately. They took down the number of my new card, so that they could get the refund back where it belonged, and they would investigate why an expired card number still worked in the system. That was Tuesday.

Two weeks ago, I went to Elizabeth Grady (Financial District location) for a bikini wax. (This is the "going out on a ledge" part. I'm normally not keen to share stories about personal grooming in public.) I go to this spa for waxing and the occasional facial because it's cheaper than others, and they offer speedy service. (Think of this as the McDonald's of spas.) The space is clinically clean, and mostly white, and it reminds me of Dunkin' Donuts except for the pseudo-Asian Zen Muzak and lack of donuts. I usually have the same woman, Sandra, for all of my services. Sandra is lovely. She did my wedding makeup, and she's pleasant and provides consistent, good service. Waxing can be very painful, and she does a lovely job. However, on this particular Friday, I did not get Sandra. I got Kaitlyn, who was brand new. This was the worst wax I have ever had in my life. There is some pain inherent in getting waxed, but well, this was far more than what the job called for. I don't want to go into too many details (since I don't want to reveal everything on the internet) but in the end, I was sore for three days after, she took off the hair I asked her not to touch, and she left a lot of hair where I wanted none. I have never before needed to scream during a waxing process, but then there is a first time for everything.

It has taken me two weeks of calling Elizabeth Grady to get a resolution. I asked for a refund. The answer was no. I asked for a gift certificate for a free service next time (with Sandra). The answer was no. I called today while on my lunchtime stroll and was told by Diane, the manager, that "I can't just give away free services, because I'd be giving away thousands of dollars in free services." This really just made me wonder how many people ask for refunds because of bad services. Or how many people Kaitlyn had seen since she started. She put me on the phone with the regional VP who happened to be in the office that day, who told me I'd have to come in and "prove" that I had had such an awful service. How lovely! I have to essentially drop my pants to get any recognition!

And yet, because I was really mad, and wanted restitution, I went. I humiliated myself and took off my trousers and showed them the damage. They offered to have one of the senior aestheticians fix the parts where the hair had been left on, and she did. (She did do a nice job, with just about no pain at all.) But that was it. No refund, no "I'm sorry for your services," not even a discount towards future services.

Of course, like any good blogger, I decided to put this out on the internet, so hopefully people will be aware that Elizabeth Grady does not handle complaints well. That they do not give refunds or future discounts, or even real apologies. But it gets better!

Exhale called me tonight when I got home to let me know that they had contacted their tech people, canceled the refund to my old card, and put it back on my new card and told me I should see it show up in 5 to 10 business days. Courtney apologized for all the trouble, and thanked me for being a good customer. And on a lark, I asked her about Exhale's policy on complaints.

I told her my story about Elizabeth Grady and how they had refused to help me, and asked her, if that had happened at her spa, what would she have done? Her answer was to tell me of a recent customer who hadn't been happy with a massage, and she gave the woman a discount on her massage and a gift certificate for a free massage in the future. That is what I call service! In fact, Courtney was a smart, savvy business woman, and she told me that they have excellent waxing services at Exhale, and if I would like to come in for my next one, she would comp the service for me.

So, as a future MBA, I reflect on the situation. Spas, unlike retail stores, have an extra reason to be dependent on customer satisfaction. Spas provide luxury services, and particularly rely on women customers, who build relationships with certain service providers. In the Boston area, there are a lot of substitutes, and customers have a lot of choices. Because of the current state of the economy, people are spending less on luxuries, like spa services. For an industry that relies on discretionary spending and repeat business in a competitive market, it's important to give the utmost in customer service. It's important to provide the best value for your customers, because they will go somewhere else. In my strategy class this week, value was defined as:

VALUE = BENEFITS - PURCHASE PRICE
In my experience at Elizabeth Grady, the value has always been low, the outweighing benefit being the convenience of location, and speed of service. And even that edge has been erased by the recent shabby treatment. At Exhale, the benefits include excellent facilities, relaxing environment, complimentary tea, and top of the line service. These are worth far more to me than the higher price tag.

Certainly, Exhale and Elizabeth Grady compete on entirely different value propositions (speed vs. luxury), but in this industry, customer service makes all the difference. I'm not sure how many people I've convinced to go try a service at Exhale, but I hope people will think twice about visiting Elizabeth Grady.
Posted by KEHutchinson at 2:42 PM