Across Boston, and presumably the nation, Hotmail has unveiled a series of ads on bus stops and billboards. Under the headline: The New Busy, the ads feature sassy slogans, as featured below: 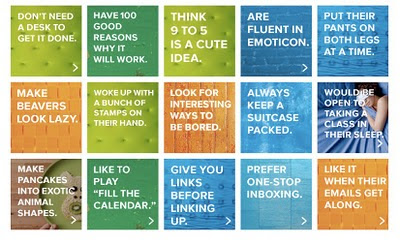 On my daily commute, "The New Busy think 9 to 5 is a cute idea" assails me from a bus shelter. It's slightly better than the "you look great, but your legs could use a lift" Shake n' Bake ad that it replaced, or the H&M Neck Tube ad hanging around from before Christmas, but really? The ad annoys me more than anything else. I don't think 9 to 5 is a cute idea. In the New Recession, it's important to fight for 9 to 5 (or the closest approximation) to avoid becoming one of the many overworked and underpaid. How can anyone try for a normal schedule when there is someone more desperate willing to stay at the office until midnight and sleep under his desk? Don't even get me started on slave labor unpaid interns.

Happily, a skim through Twitter shows that I'm not the only one rubbed the wrong way by those ads:

@BostonMo: Can someone please explain the new "New Busy" Hotmail.com marketing campaign? I don't understand a single ad around the Hub!

@tanukisan: Hotmail's "new busy" ad campaign makes no damn sense at all. I will continue to ignore the unreadable sliding text on 'em.

@baka_rakuda: I don't know what a "NEW BUSY" is but according to MS they can pack a weeks worth of clothes in a carry on. How very mundane.

@fastchicken: if you happen to know anyone in the MS Hotmail team, please point and laugh from me: http://tinyurl.com/ye5r3x9 The New Busy?

@mikegore: hotmail, your "new busy" campaign is annoying the hell out of me. maybe because i'm too busy using google programs...

@TheLastLow: Microsoft's "New Busy" ad campaign might be worse than Bud's "Drinkability" disaster. Are these people even trying?

@kehutchinson: The "New Busy" is a myth--we're all busy, and none of it's new.

Yes, that last one is mine, and it's worth repeating. We're all stressed out by the state of the economy today: layoffs loom, bills menace, and we all have to wonder where the breaking point is. We don't want tools that just confirm that we're hamsters in a wheel, we want tools that will make us feel like we have a little control in our lives.

So listen up, Hotmail. I'm not the New Busy, and there are plenty of others who feel the same way. Start building a tool that will be for the New Relaxed.

Posted by KEHutchinson at 6:56 PM