Note: I've been aiming to have my latest set of posts focus on marketing and social media, but something happened recently on a social network, and I want to write about it, even though it's super political.

It began with a romantic thought for Valentine's Day. My husband and I are fairly demonstrative about loving each other, and since we say "I love you" at least once a day (usually 20 or more), neither of us really gets into the whole candy and flowers part of Valentine's.

This year, Nate asked me if he could give me a different kind a present: a donation in my name to a feminist organization. This was thrilling to me. I originally asked for a donation to Planned Parenthood, but Nate asked to pick one himself. After researching several different organizations, he chose NARAL.

We are made up of pro-choice women and men across the United States. Together, we protect a woman's right to choose.

How do we protect the right to choose, exactly?


We are passionate about our work—and we couldn't do our job without the great people who stand with us.

That's why Fortune Magazine has described NARAL Pro-Choice America as "one of the top 10 advocacy groups in America."

I am very much pro-choice, and so are many people. One in three American women has had an abortion. It's a very personal choice for a woman to make, but it is important to keep the option open.

I was proud of Nate's gift, so I tweeted about it:

And then the torrent of anti-choice tweets directed at me started. Lifepeeps accused me of funding the ripping of limbs from babies, Toupsfamily told me that I was lying when I said NARAL promoted contraceptives, saying that the only "birth control" NARAL supported was abortion. Then led to many anti-choice myths being spewed, such as abortion causes breast cancer.

I've been trying to engage these people in conversation about reproductive health, and eventually it comes down to the fact that these people believe in God, and what they really want is to keep women from having access to contraceptives. In fact, MateoDHoffman has spent the better part of this morning telling me that sex is not necessary and no one needs to have it. He does not agree with my point that sex is a basic biological function, and it offers many health benefits, not to mention psychological benefits.

I've also been informed that doctors never tell women the risks of birth control, which I find odd, since I have to answer questions every year and undergo tests for blood clots, heart function, etc in order to be prescribed my pills. I get a big pamphlet of information when I pick up my prescription that outlines those risks. They're mentioned in the ads for contraceptives on TV, along with all the scary risks for taking any medication.

These anti-choice folks insult my intelligence. I accept that we're not going to agree, and I'm not going to convert them, but I am compelled to let them know that they do not speak for all women (in fact, I'm pretty sure none of these people are women).

I read a few posts recently from some feminist writers that I truly respect, talking about the exhaustion of being a feminist, in having to constantly be ready for action and to defend women's rights and choices. I'm not the most active feminist in the world, but this anti-choice stychomythia makes me tired. I have to take a break at some point, but I'll come back. I don't want these people to think they've beaten me with their obsfucation and religious rhetoric. Because they haven't. I will continue to fight for women's rights, 140 characters at a time.

It's not breaking news anymore, but since it's still a major topic of discussion in my household, let's talk about the Susan G. Komen (For the Cure™) Foundation and the defunding of Planned Parenthood debacle.

Komen describes its work as:


Today, Komen for the Cure is the world’s largest grassroots network of breast cancer survivors and activists fighting to save lives, empower people, ensure quality care for all and energize science to find the cures. Thanks to events like the Komen Race for the Cure, we have invested more than $1.9 billion to fulfill our promise, becoming the largest source of nonprofit funds dedicated to the fight against breast cancer in the world.

As part of that work, Komen grants funding for research and prevention, including "Community Health and Outreach":


Our community health grants ensure quality care for all by funding breast cancer education, screening and treatment projects for those who need them most. Through community needs assessments, more than 75,000 volunteers working through local Affiliates identify unmet needs in their communities and provide Affiliate community health grants to fill these gaps. Komen’s Global Headquarters also administers the National Capital Area Grants Program to address breast cancer disparities in the medically underserved in the capital area. And to ensure quality care and access around the global, our Susan G. Komen for the Cure Global Promise Fund works with local communities and International organizations to develop innovative education and outreach programs. 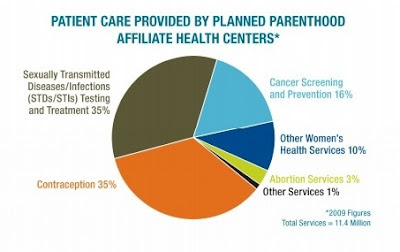 Planned Parenthood was temporarily blindsided by the defunding move, and then the Internet began to rally around the cause of providing cancer screenings to women in need. Soon, the anti-abortion stance of a VP at Komen emerged. Karen Handel, it was alleged, designed the new rule in order to exclude Planned Parenthood from receiving funding because the group also provides abortion services (a mere 3% of PP's output).

After major outrage across the Internet and among donors:

Why Komen Yanked PP's Funding - Delusions of Grandeur
Komen's PP Decision: Seems Like it Was About Abortion - Mother Jones
Komen Decision Results in Spike in Donations to PP - Washington Post

However, I think it's important to respect an organization that provides funding for cancer research and screenings, and generally works to prevent and cure cancer. It's a lofty goal, and I respect that.

Looking at the Komen incident from the perspective of a marketer, there are multiple mistakes to consider here. Leaving aside the political arguments, there are some valuable lessons to learn in terms of public relations:
Never underestimate the power of the Internet, particularly social media sharing. In the digital age, it only takes a few clicks or a copy and paste command to share bad news. And we all know that people are far more likely to share a bad story than a good one. Combine that with auto-sharing, auto-tweeting, and you have a massive echo chamber to contend with. Consider about how your audience will perceive your action and how they will react.
Know your audience, and  know your industry's audience. Certainly Komen knows its customers, donors, patients, and researchers. Any good foundation will know the position of its stakeholders. But when you consider that Komen is in the business of providing health services to women (industry grouping), it's astounding that the foundation didn't realize that it was also in the same industry as Planned Parenthood. They're not competitors, but they serve an overlapping audience. You have to consider if you are going to make a radical change that affects a stakeholder (PP), you need to consider how that will affect your supporters who also support that stakeholder.
This video neatly encapsulates both these points:

Be transparent in your governance, and stick to your principles. People can find all kinds of information about your organization these days, so if you make a radical shift, don't make up a silly cover story. If Karen Handel honestly wanted to defund PP because it provides abortion services, she should say so. She should stand up for her anti-abortion stance and be honest. No one, especially donors, likes to be lied to. Once you've obsfucated, it's ridiculously difficult to re-earn the trust of the public. But additionally, the Komen foundation should stick to its principles of serving people in need, providing breast cancer screenings. Moving away from its original principles and lying about it will keep the Komen foundation in the doghouse for a while.

Be alert and be prepared. The real winner in this showdown is Planned Parenthood. By playing off this issue, it's pulled in a lot of funding, including a $250,000 match grant from Mayor Bloomberg plus $100,000 from the anti-cancer LiveStrong group. PP used its vast network to spread the word of the defunding to give itself a back up plan to continue to provide cancer screenings, a key service it provides.

Do you think Komen can recover? I'd like to see a major retooling of its organizational structure, including ditching the pink kitsch.