I make a mean chocolate cake. My recipe is called Groovy Chocolate Cake from the delightful cookbook Chocolate Kicks and Other Recipes for the Chocolate Addict

A few weeks ago, I felt like brownies, so I hunted up this book and decided to actually try one of the other recipes in it, the titular Chocolate Kicks. I've since discovered that the times/heat settings for the baking don't quite line up with my futuristic kitchen. So I made adjustments.

Today, I attempted Chocolate Weeds. (I should also point out that while 75% of the recipes in this book are named after pot references, none of them include marijuana in the ingredients.) They're supposed to be cookies, with pecans. I made the batter and was stunned to see how runny it was. "Oh well," I thought, "maybe they fluff up in the oven." 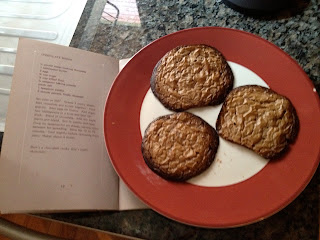 Nope. They turned into these hard, flat, unappetizing discs that were amazingly difficult to get off of the cookie sheet. So I went back to the batter. It really was quite runny. I decided to add more flour. I added in 1/4 cups until I felt it was stiff enough.

The second pan came out much better. 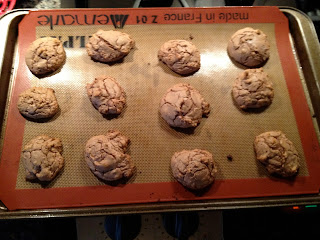 I've now noted in the book that instead of 1/4 cup of flour, if I make this recipe again I need 1 cup of flour.

In baking with old cookbooks (and the majority of my cookbooks are very old), it helps to remember that today's ingredients are different, as are how we prepare food. (For one thing, this cookbook always asks you to melt the chocolate in a double boiler, but it's much simpler to do this in a microwave.)

When you're working on a project at work, or examining a business process, so often companies do things the same way, because "that's how we've always done it." But if you're running a process the same way today as you did in 1970, you could be missing out on improvements. Does your organization always rely on the same person working at the same post in the assembly line? In the early days of the company, New Balance experimented with letting assembly line workers switch roles along a schedule, so that the person who did Step 1 could see what all the other steps on the line were. This led to workers finding best practices on the assembly line, and improving the product, not to mention the process.

Take a look at the current recipes of your company. When did you put together each process? What are the moving parts? Are those parts still relevant? Does a project that has used to take 3 people to do now take 5 people to do? Why? Is the process changing? How?

I recommend finding the quietest time in your company's yearly calendar and focus on one department, project, or process every year. Examine the nuts and bolts, preferably with those team members, and ask them what they need to do their job better. If you can take this time to make one process better this year, you can use that productivity to identify the next area for improvement.